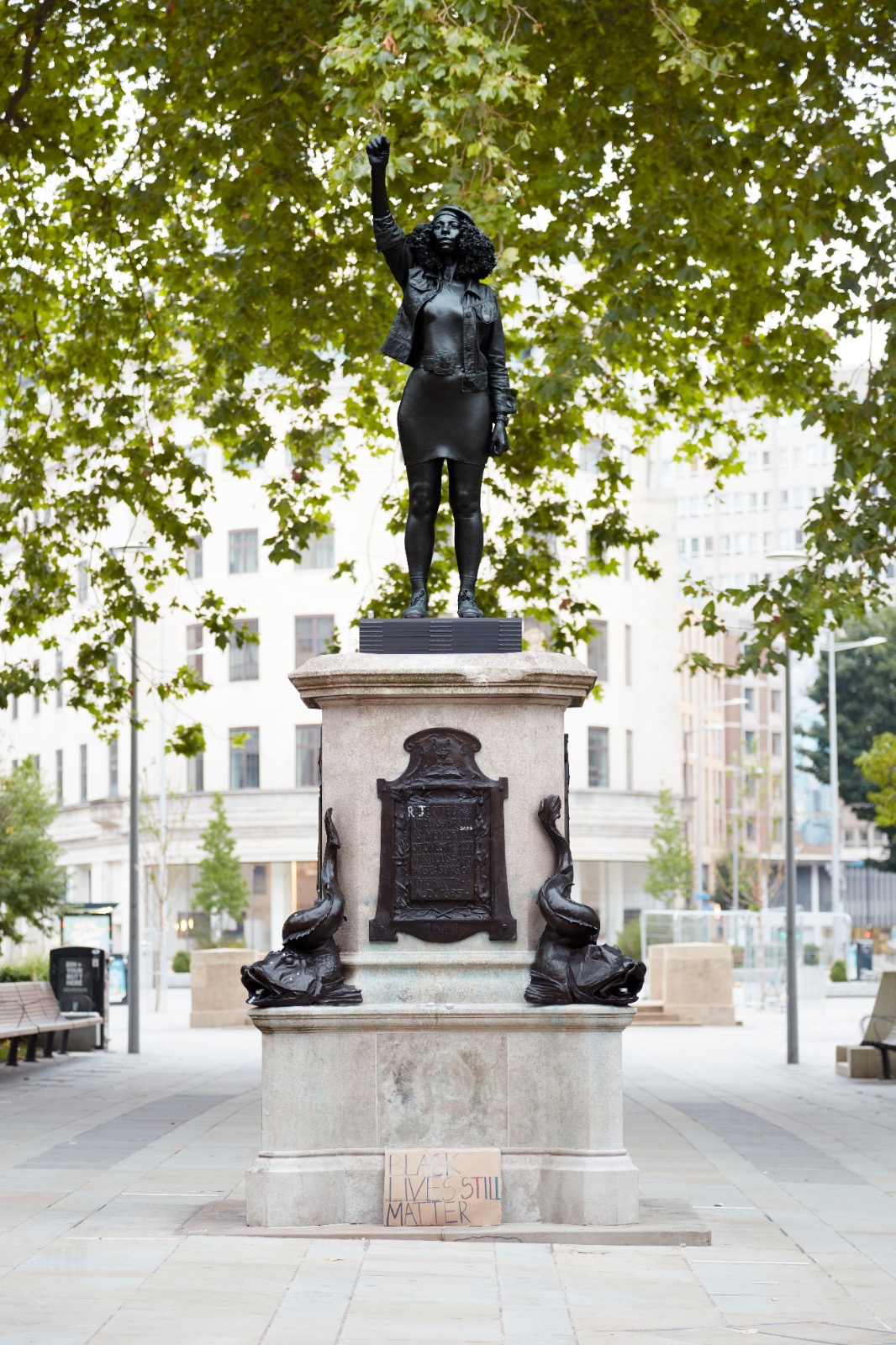 Artist Marc Quinn and Bristol resident Jen Reid unveil a new temporary, public installation, A Surge of Power (Jen Reid) 2020, on top of Edward Colston’s empty plinth in Bristol, England. This life-sized sculpture is based on an image the artist saw on Instagram of local resident Jen Reid standing on the vacant plinth with her fist raised in a Black Power salute, a spontaneous moment following a Black Lives Matter protest in June 2020. During the protest, a statue of 17th century slave trader Edward Colston was toppled from this spot. Cast in black resin, this new sculpture A Surge of Power (Jen Reid) 2020 takes its place. No formal consent has been sought for the installation.

“On my way home from the protests on 7 June, I felt an overwhelming impulse to climb onto the plinth, just completely driven to do it by the events which had taken place right before. Seeing the statue of Edward Colston being thrown into the river felt like a truly historical moment; huge.

When I was stood there on the plinth, and raised my arm in a Black Power salute, it was totally spontaneous, I didn’t even think about it. It was like an electrical charge of power was running through me. My immediate thoughts were for the enslaved people who died at the hands of Colston and to give them power. I wanted to give George Floyd power, I wanted to give power to Black people like me who have suffered injustices and inequality. A surge of power out to them all.

I’m collaborating with Marc Quinn on this project as he cares about pushing inclusion to the forefront of people’s minds and uses his art to make people think. Creating this sculpture is so important as it helps keep the journey towards racial justice and equity moving, because Black lives matter every day.

This sculpture is about making a stand for my mother, for my daughter, for Black people like me. It’s about Black children seeing it up there. It’s something to feel proud of, to have a sense of belonging, because we actually do belong here and we’re not going anywhere.”

“This sculpture captures a moment. It happened in the middle of the news and the worldwide ripple effect from George Floyd’s killing – all of which I had been following. My friend who knew this showed me a picture on Instagram of Jen standing on the plinth in Bristol with her fist in a Black Power salute. My first, instant thought was how incredible it would be to make a sculpture of her, in that instant. It is such a powerful image, of a moment I felt had to be materialised, forever. I contacted Jen via social media to discuss the idea of the sculpture and she told me she wanted to collaborate.

The public realm feels so vital at the moment, as a space to activate ideas and create change. It feels essential in particular for public art to play its part. In 2005, I made a sculpture of Alison Lapper Pregnant for Trafalgar Square’s Fourth Plinth and learnt how effective public art can be in stimulating attention and discussion around urgent issues. The plinth of Edward Colston in Bristol seems the right place to share this sculpture about the fight against racism, which is undoubtedly the other virus facing society today.

Jen and I are not putting this sculpture on the plinth as a permanent solution to what should be there - it’s a spark which we hope will help to bring continued attention to this vital and pressing issue. We want to keep highlighting the unacceptable problem of institutionalised and systemic racism that everyone has a duty to face up to. This sculpture had to happen in the public realm now: this is not a new issue, but it feels like there’s been a global tipping point. It’s time for direct action now.

As well as being a person in the world, I’m an artist and a big part of my work is making art about historical moments within contemporary society. Like my History Paintings which I have been making over the last decade, which started with an image from the London riots following the death of Mark Duggan. In my work I look to the world and am committed to reflecting what I see, including inequalities and injustices. Prejudice, such as racism, is part of that.

Keeping the issue of Black people’s lives and experiences in the public eye and doing whatever I can to help is so important. Those of us who have privilege have a duty to be part of change. Something that Desmond Tutu said resonates with me strongly: “If you are neutral in situations of injustice, you have chosen the side of the oppressor.” I think this sums up how we’ve reached the point where white people have to be allies and white people in positions of power need to speak up and actively combat racism. For me this has meant taking time to educate myself, listen to others and find a meaningful way of contributing. The reasons why Jen wanted to do this together are so important, this sculpture is an embodiment and amplification of Jen’s ideas and experiences, and of the past, present and her hope for a better future.”

The installed sculpture, A Surge of Power (Jen Reid) 2020, is not-for-profit. If sold, all profit will be donated to two charities chosen by Jen Reid, namely Cargo Classroom, a Black history syllabus created for Bristol teenagers and The Black Curriculum, a social enterprise founded in 2019 by young people to address the lack of Black British history in the UK curriculum.